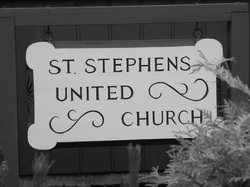 Where we've come from...

The current St. Stephen's United Church building was built in 1961  next to the Community Hall at Memorial and Village Way.  Also on this site was a smaller building that was built in 1941 and served as the church until the new church was built, at which time it became the Christian Education Centre and church office.  It was also utilized as a kindergarten classroom when Qualicum Elementary School was overcrowded during the 1970's. In 1994 the old church was moved to Heritage Square where it took on a new life serving the Baptist congregation.  In 1994 the main church was expanded to include a large hall and the basement was completed for the church office and classrooms.

Throughout the years, St. Stephen's has served the community well, with many devoted and hard-working Ministers and a loyal congregation.  Our present Minister, Rev. Phillip Spencer is St. Stephen's 17th Minister and has been serving at St. Stephen's since 1993.

Up until November 1, 2008, St. Stephen's was part of a two point pastoral charge which included both St. Stephen's in Qualicum Beach and Grace United Church in Coombs.  Phil Spencer was the Minister at both churches.  In the fall of 1998 St. Stephen's introduced a second worship service at 9:00am in order to offer a contemporary style of worship in addition to its traditional service.   This meant that Phil could no longer preach at Grace United on Sunday mornings.  Rev. Dale Cuming, a retired Minister,  stepped in to lead Sunday morning worship at Grace.  After Dale's  second retirement, worship at Grace was lead by a variety of different people including  Mikel Laurie who worked as part time youth Minister at St. Stephen's and part time Minister at Grace.  Following Mikel's departure in the summer of 2008, it was decided by both congregations that in order to serve each congregation best, the two would separate into their own pastoral charge.

Since the beginning of the new millennium, St. Stephen's has become very intentional about determining our values and goals for our future and prayerfully trying to detect where God is leading us.  While we strive to remain current and relevant in today's society, we also appreciate where we have come from and the many blessings we have received from those who have come before us.  Along with modern worship styles you will also see our history as we have received many memorial gifts over the years.  There are two stained glass windows in the front of the sanctuary, one of which was moved from the old church. In our small lounge there is a beautiful old organ which was used at the very first church, circa 1920.  In the late 1990's the organ was restored to its original condition and donated to the church.    As you view this old organ and the many hand made artifacts in our sanctuary, please remember to give thanks to the many Pioneers of our church who made all this possible.